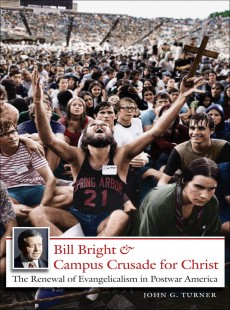 The Renewal of Evangelicalism in Postwar America

Founded as a local college ministry in 1951, Campus Crusade for Christ has become one of the world's largest evangelical organizations, today boasting an annual budget of more than $500 million. Nondenominational organizations like Campus Crusade account for much of modern evangelicalism's dynamism and adaptation to mainstream American culture. Despite the importance of these "parachurch" organizations, says John Turner, historians have largely ignored them.

Turner offers an accessible and colorful history of Campus Crusade and its founder, Bill Bright, whose marketing and fund-raising acumen transformed the organization into an international evangelical empire. Drawing on archival materials and more than one hundred interviews, Turner challenges the dominant narrative of the secularization of higher education, demonstrating how Campus Crusade helped reestablish evangelical Christianity as a visible subculture on American campuses. Beyond the campus, Bright expanded evangelicalism's influence in the worlds of business and politics. As Turner demonstrates, the story of Campus Crusade reflects the halting movement of evangelicalism into mainstream American society: its awkward marriage with conservative politics, its hesitancy over gender roles and sexuality, and its growing affluence.