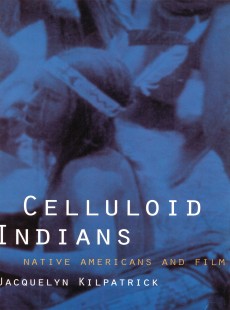 Native American characters have been the most malleable of metaphors for filmmakers. The likeable Doc of Stagecoach (1939) had audiences on the edge of their seats with dire warnings about “that old butcher, Geronimo.” Old Lodgeskins of Little Big Man (1970) had viewers crying out against the demise of the noble, wise chief and his kind and simple people. In 1995 Disney created a beautiful, peace-loving ecologist and called her Pocahontas. Only occasionally have Native Americans been portrayed as complex, modern characters in films like Smoke Signals.   Celluloid Indians is an accessible, insightful overview of Native American representation in film over the past century. Beginning with the birth of the movie industry, Jacquelyn Kilpatrick carefully traces changes in the cinematic depictions of Native peoples and identifies cultural and historical reasons for those changes. In the late twentieth century, Native Americans have been increasingly involved with writing and directing movies about themselves, and Kilpatrick places appropriate emphasis on the impact that Native American screenwriters and filmmakers have had on the industry. Celluloid Indians concludes with a valuable, in-depth look at influential and innovative Native Americans in today’s film industry.

Jacquelyn Kilpatrick, of Choctaw, Cherokee, and Irish descent, is a professor of English at Governor’s State University in University Park, Illinois. Her articles have appeared in Creative Screenwriting and Cineaste.

"Any filmmaker seeking to present images draped in honesty should read this book. It is an absolute must."—E. Donald Two-Rivers, author of Survivor's Medicine