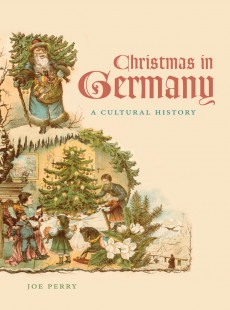 For poets, priests, and politicians--and especially ordinary Germans--in the nineteenth and twentieth centuries, the image of the loving nuclear family gathered around the Christmas tree symbolized the unity of the nation at large. German Christmas was supposedly organic, a product of the winter solstice rituals of pagan "Teutonic" tribes, the celebration of the birth of Jesus, and the age-old customs that defined German character. Yet, as Joe Perry argues, Germans also used these annual celebrations to contest the deepest values that held the German community together: faith, family, and love, certainly, but also civic responsibility, material prosperity, and national belonging.

This richly illustrated volume explores the invention, evolution, and politicization of Germany's favorite national holiday. According to Perry, Christmas played a crucial role in public politics, as revealed in the militarization of "War Christmas" during World War I and World War II, the Nazification of Christmas by the Third Reich, and the political manipulation of Christmas during the Cold War. Perry offers a close analysis of the impact of consumer culture on popular celebration and the conflicts created as religious, commercial, and political authorities sought to control the holiday's meaning. By unpacking the intimate links between domestic celebration, popular piety, consumer desires, and political ideology, Perry concludes that family festivity was central in the making and remaking of public national identities.