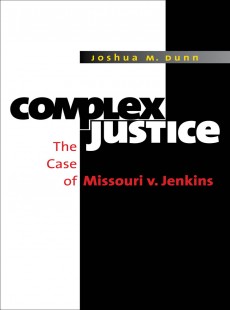 The Case of Missouri v. Jenkins

In 1987 Judge Russell Clark mandated tax increases to help pay for improvements to the Kansas City, Missouri, School District in an effort to lure white students and quality teachers back to the inner-city district. Yet even after increasing employee salaries and constructing elaborate facilities at a cost of more than $2 billion, the district remained overwhelmingly segregated and student achievement remained far below national averages.

Just eight years later the U.S. Supreme Court began reversing these initiatives, signifying a major retreat from Brown v. Board of Education. In Kansas City, African American families opposed to the district court's efforts organized a takeover of the school board and requested that the court case be closed. Joshua Dunn argues that Judge Clark's ruling was not the result of tyrannical "judicial activism" but was rather the logical outcome of previous contradictory Supreme Court doctrines. High Court decisions, Dunn explains, necessarily limit the policy choices available to lower court judges, introducing complications the Supreme Court would not anticipate. He demonstrates that the Kansas City case is a model lesson for the types of problems that develop for lower courts in any area in which the Supreme Court attempts to create significant change. Dunn's exploration of this landmark case deepens our understanding of when courts can and cannot successfully create and manage public policy.