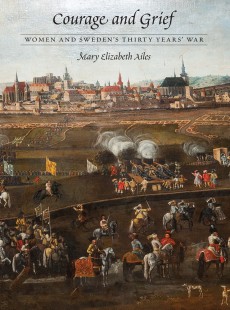 Courage and Grief illuminates in a nuanced fashion Sweden's involvement in Europe's destructive Thirty Years' War (1618–48). Focusing on the various roles women performed in the bloody and extended conflict, Mary Elizabeth Ailes analyzes how methods of warfare and Swedish society were changing in profound ways. This study considers the experiences of unmarried camp followers and officers' wives as well as peasant women who remained in the countryside during times of conflict and upheaval. Women contributed to the war effort in a variety of ways. On campaign they provided support services to armies in the field. On the home front they helped to minimize disruptions incurred within their frayed communities. As increasing numbers of men left to fight overseas, women took over local economic activities and defended their families' interests. Such activities significantly altered the fabric of Swedish society. Examining women's wartime experiences in the Thirty Years' War enhances our understanding of women's roles in society, the nature of female power and authority, and the opportunities and hardships that warfare brought to women's lives.

Mary Elizabeth Ailes is a professor of history at the University of Nebraska at Kearney. She is the author of Military Migration and State Formation: The British Military Community in Seventeenth-Century Sweden (Nebraska, 2002).

"The Swedish kingdom was the most innovative military power in Europe from the middle of the sixteenth until well into the seventeenth century. The contributions of women to making those innovations and the impacts of those innovations offer an interesting and little-researched story. Mary Elizabeth Ailes makes a convincing case for the importance of women in Sweden's war efforts."—Jason Lavery, professor of early modern European history at Oklahoma State University and author of The History of Finland