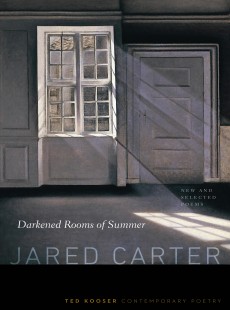 For nearly half a century Jared Carter has been quietly mapping the American heartland. Line by line, his poetry has shown us the landscape, sounded the voices, conjured the music, and tested the silence of the ever-changing and yet ever-constant Midwest that figures so prominently in the American story. And yet what we find in Carter's poetry is endlessly new. Here, in poems selected from his first five books, is the summer-long buzz of the cicada and the crack of the cue ball, the young rebel on his big Harley, and the YMCA secretary who backstrokes her way across the indoor pool. Here, too, are thirty new poems in fixed form that illustrate Carter's continued quest for a poetry of "universal interest." Taken together, these selections are, truly, poetry in the American grain.

Jared Carter lives in Indiana. He has received the Walt Whitman Award of the Academy of American Poets, the Poets’ Prize, a fellowship from the John Simon Guggenheim Memorial Foundation, and two literary fellowships from the National Endowment for the Arts.

“Carter’s is a poetry of a resolute middle distance, firmly of this world: between the dust under the earth and the dust of space there exists the place that the poem can illumine.”—Helen Vendler, New York Review of Books