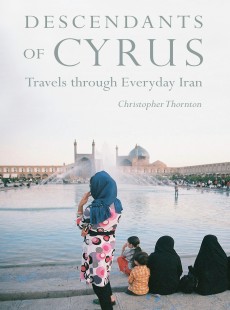 We know the current political narrative: Iran is dangerous, full of terrorists and weapons of mass destruction. But Christopher Thornton here tells a different story: one of good food, liberal-minded people, beautiful architecture, and a country with a history spanning over seven thousand years that's been influenced not only by the myriad cultures spanning Central Asia but also by Europe and the West.Descendants of Cyrus introduces readers to ordinary Iranians living lives far different from what is shown on Western television. Thornton takes us through the cities of Iran, where he encounters robust, barely hidden black markets filled with American movies and music; sees the women of Shiraz explore modern fashion and beauty products with no fear of reprisal from a weakened regime; and meets the students populating the university town of Hamadan, where a generation of activists is finding its voice. Thornton draws from the past and present alike on each stop of this fascinating travelogue, using history to inform his conversations with citizens from all walks of life. Unexpected variety comes to light, embodying surprising religious and ethnic diversity, intellectual curiosity, a thirst for Western culture, and the desire to live a modern, secular life.  A firsthand look at one of the least understood and yet most politically significant countries on earth, Descendants of Cyrus taps into the hidden pulse of a culture and a generation that promises to reshape Iran in a way few Westerners can anticipate.

Christopher Thornton is a professor of writing at Zayed University in the United Arab Emirates. He has worked as a special correspondent to the U.S. State Department's International Information Program, writing feature stories on Arab and Muslim life in the United States for the department's website. His essays on Iran have also appeared in the Atlantic, Michigan Quarterly Review, Commonweal, and Confrontation.