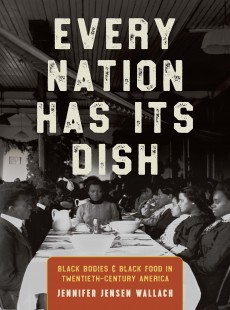 Every Nation Has Its Dish

Jennifer Jensen Wallach's nuanced history of black foodways across the twentieth century challenges traditional narratives of "soul food" as a singular style of historical African American cuisine. Wallach investigates the experiences and diverse convictions of several generations of African American activists, ranging from Booker T. Washington and W. E. B. Du Bois to Mary Church Terrell, Elijah Muhammad, and Dick Gregory. While differing widely in their approaches to diet and eating, they uniformly made the cultivation of "proper" food habits a significant dimension of their work and their conceptions of racial and national belonging. Tracing their quests for literal sustenance brings together the race, food, and intellectual histories of America.

Directly linking black political activism to both material and philosophical practices around food, Wallach frames black identity as a bodily practice, something that conscientious eaters not only thought about but also did through rituals and performances of food preparation, consumption, and digestion. The process of choosing what and how to eat, Wallach argues, played a crucial role in the project of finding one's place as an individual, as an African American, and as a citizen.