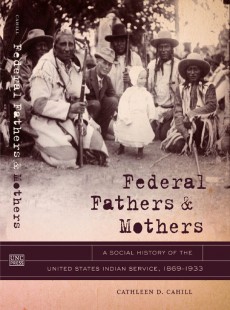 Established in 1824, the United States Indian Service (USIS), now known as the Bureau of Indian Affairs, was the agency responsible for carrying out U.S. treaty and trust obligations to American Indians, but it also sought to "civilize" and assimilate them. In Federal Fathers and Mothers, Cathleen Cahill offers the first in-depth social history of the agency during the height of its assimilation efforts in the late nineteenth and early twentieth centuries. Cahill shows how the USIS pursued a strategy of intimate colonialism, using employees as surrogate parents and model families in order to shift Native Americans' allegiances from tribal kinship networks to Euro-American familial structures and, ultimately, the U.S. government.