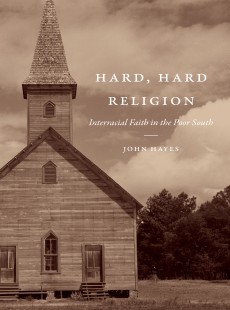 Interracial Faith in the Poor South

In his captivating study of faith and class, John Hayes examines the ways folk religion in the early twentieth century allowed the South's poor--both white and black--to listen, borrow, and learn from each other about what it meant to live as Christians in a world of severe struggle. Beneath the well-documented religious forms of the New South, people caught in the region's poverty crafted a distinct folk Christianity that spoke from the margins of capitalist development, giving voice to modern phenomena like alienation and disenchantment. Through haunting songs of death, mystical tales of conversion, grassroots sacramental displays, and an ethic of neighborliness, impoverished folk Christians looked for the sacred in their midst and affirmed the value of this life in this world.

From Tom Watson and W. E. B. Du Bois over a century ago to political commentators today, many have ruminated on how, despite material commonalities, the poor of the South have been perennially divided by racism. Through his excavation of a folk Christianity of the poor, which fused strands of African and European tradition into a new synthesis, John Hayes recovers a historically contingent moment of interracial exchange generated in hardship.