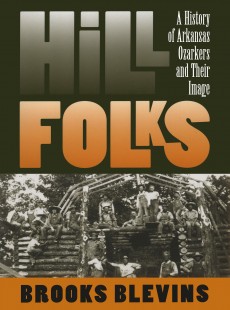 A History of Arkansas Ozarkers and Their Image

The Ozark region, located in northern Arkansas and southern Missouri, has long been the domain of the folklorist and the travel writer--a circumstance that has helped shroud its history in stereotype and misunderstanding. With Hill Folks, Brooks Blevins offers the first in-depth historical treatment of the Arkansas Ozarks. He traces the region's history from the early nineteenth century through the end of the twentieth century and, in the process, examines the creation and perpetuation of conflicting images of the area, mostly by non-Ozarkers.

Covering a wide range of Ozark social life, Blevins examines the development of agriculture, the rise and fall of extractive industries, the settlement of the countryside and the decline of rural communities, in- and out-migration, and the emergence of the tourist industry in the region. His richly textured account demonstrates that the Arkansas Ozark region has never been as monolithic or homogenous as its chroniclers have suggested. From the earliest days of white settlement, Blevins says, distinct subregions within the area have followed their own unique patterns of historical and socioeconomic development. Hill Folks sketches a portrait of a place far more nuanced than the timeless arcadia pictured on travel brochures or the backward and deliberately unprogressive region depicted in stereotype.