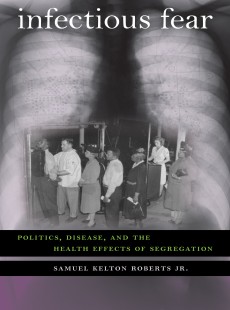 Politics, Disease, and the Health Effects of Segregation

For most of the first half of the twentieth century, tuberculosis ranked among the top three causes of mortality among urban African Americans. Often afflicting an entire family or large segments of a neighborhood, the plague of TB was as mysterious as it was fatal. Samuel Kelton Roberts Jr. examines how individuals and institutions--black and white, public and private--responded to the challenges of tuberculosis in a segregated society.

Reactionary white politicians and health officials promoted "racial hygiene" and sought to control TB through Jim Crow quarantines, Roberts explains. African Americans, in turn, protested the segregated, overcrowded housing that was the true root of the tuberculosis problem. Moderate white and black political leadership reconfigured definitions of health and citizenship, extending some rights while constraining others. Meanwhile, those who suffered with the disease--as its victims or as family and neighbors--made the daily adjustments required by the devastating effects of the "white plague."

Exploring the politics of race, reform, and public health, Infectious Fear uses the tuberculosis crisis to illuminate the limits of racialized medicine and the roots of modern health disparities. Ultimately, it reveals a disturbing picture of the United States' health history while offering a vision of a more democratic future.