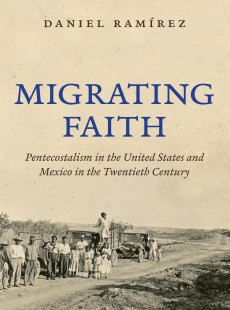 Pentecostalism in the United States and Mexico in the Twentieth Century

Daniel Ramirez's history of twentieth-century Pentecostalism in the U.S.-Mexico borderlands begins in Los Angeles in 1906 with the eruption of the Azusa Street Revival. The Pentecostal phenomenon--characterized by ecstatic spiritual practices that included speaking in tongues, perceptions of miracles, interracial mingling, and new popular musical worship traditions from both sides of the border--was criticized by Christian theologians, secular media, and even governmental authorities for behaviors considered to be unorthodox and outrageous. Today, many scholars view the revival as having catalyzed the spread of Pentecostalism and consider the U.S.-Mexico borderlands as one of the most important fountainheads of a religious movement that has thrived not only in North America but worldwide.

Ramirez argues that, because of the distance separating the transnational migratory circuits from domineering arbiters of religious and aesthetic orthodoxy in both the United States and Mexico, the region was fertile ground for the religious innovation by which working-class Pentecostals expanded and changed traditional options for practicing the faith. Giving special attention to individuals' and families' firsthand accounts and tracing how a vibrant religious music culture tied transnational communities together, Ramirez illuminates the interplay of migration, mobility, and musicality in Pentecostalism's global boom.