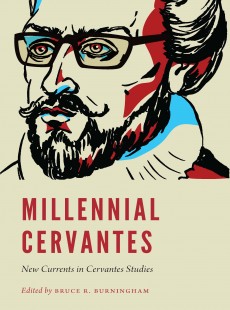 Millennial Cervantes explores some of the most important recent trends in Cervantes scholarship in the twenty-first century. It brings together leading Cervantes scholars of the United States in order to showcase their cutting-edge work within a cultural studies frame that encompasses everything from ekphrasis to philosophy, from sexuality to Cold War political satire, and from the culinary arts to the digital humanities.Millennial Cervantes is divided into three sets of essays—conceptually organized around thematic and methodological lines that move outward in a series of concentric circles. The first group, focused on the concept of "Cervantes in his original contexts," features essays that bring new insights to these texts within the primary context of early modern Iberian culture. The second group, focused on the concept of "Cervantes in comparative contexts," features essays that examine Cervantes's works in conjunction with those of the English-speaking world, both seventeenth- and twentieth-century. The third group, focused on the concept of "Cervantes in wider cultural contexts," examines Cervantes's works—principally Don Quixote—as points of departure for other cultural products and wider intellectual debates. This collection articulates the state of Cervantes studies in the first two decades of the new millennium as we move further into a century that promises both unimagined technological advances and the concomitant cultural changes that will naturally adhere to this new technology, whatever it may be.

Bruce R. Burningham is a professor of Hispanic studies and theater at Illinois State University. He is the author of Radical Theatricality: Jongleuresque Performance on the Early Spanish Stage and Tilting Cervantes: Baroque Reflections on Postmodern Culture.

"As the four hundredth anniversary of Don Quixote was celebrated around the world, the book was proclaimed to be not only one of the most transcendental works of the Western tradition—considered second only to the Bible—but also a global phenomenon, perfectly in keeping with our times. Millennial Cervantes is important as part of that global celebration but also as the due contribution of North American Hispanist scholarship."—Aurora Hermida-Ruiz, coeditor of Garcilaso Studies: A New Trajectory