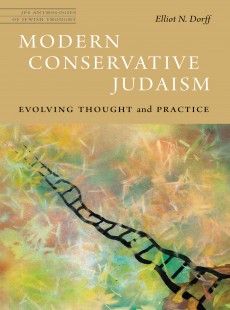 A major Conservative movement leader of our time, Elliot N. Dorff provides a personal, behind-the-scenes guide to the evolution of Conservative Jewish thought and practice over the last half century. His candid observations concerning the movement's ongoing tension between constancy and change shed light on the sometimes unified, sometimes diverse, and occasionally contentious reasoning behind the modern movement's most important laws, policies, and documents. Meanwhile, he has assembled, excerpted, and contextualized the most important historical and internal documents in modern Conservative movement history for the first time in one place, enabling readers to consider and compare them all in context. In "Part 1: God" Dorff explores various ways that Conservative Jews think about God and prayer. In "Part 2: Torah" he considers different approaches to Jewish study, law, and practice; changing women's roles; bioethical rulings on issues ranging from contraception to cloning; business ethics; ritual observances from online minyanim to sports on Shabbat; moral issues from capital punishment to protecting the poor; and nonmarital sex to same-sex marriage. In "Part 3: Israel" he examines Zionism, the People Israel, and rabbinic rulings in Israel.

Elliot N. Dorff is rector and Sol and Anne Dorff Distinguished Service Professor of Philosophy at the American Jewish University and visiting professor at UCLA School of Law. He was an editor of the official Conservative statement of principles Emet Ve-Emunah and coeditor of the Conservative commentary Etz Hayim. He is author of twelve books, four published by JPS, including To Do the Right and the Good: A Jewish Approach to Modern Social Ethics (2002), winner of the National Jewish Book Award.