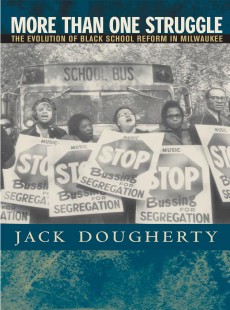 More Than One Struggle

The Evolution of Black School Reform in Milwaukee

Dougherty tells the story of black school reform movements in Milwaukee from the 1930s to the 1990s, highlighting the multiple perspectives within each generation. In profiles of four leading activists, he reveals how different generations redefined the meaning of the Brown decision over time to fit the historical conditions of their particular struggles. William Kelley of the Urban League worked to win teaching jobs for blacks and to resettle Southern black migrant children in the 1950s; Lloyd Barbee of the NAACP organized protests in support of integrated schools and the teaching of black history in the 1960s; and Marian McEvilly and Howard Fuller contested--in different ways--the politics of implementing desegregation in the 1970s, paving the way for the 1990s private school voucher movement. Dougherty concludes by contrasting three interpretations of the progress made in the fifty years since Brown, showing how historical perspective can shed light on contemporary debates over race and education reform.