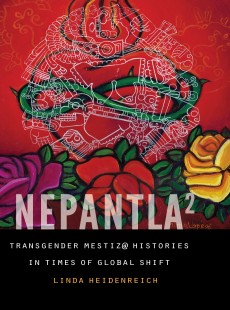 Nepantla Squared maps the lives of two transgender mestiz@s, one during the turn of the twentieth century and one during the turn of the twenty-first century, to chart the ways race, gender, sex, ethnicity, and capital function differently in different times. To address the erasure of transgender mestiz@ realities from history, Linda Heidenreich employs an intersectional analysis that critiques monopoly and global capitalism. Heidenreich builds on the work of Gloria Anzaldúa's concept of nepantleras, those who could live between and embody more than one culture, to coin the term nepantla², marking times of capitalist transition where gender was also in motion. Transgender mestiz@s, too, embodied that movement. Heidenreich insists on a careful examination of the multiple in-between spaces that construct lives between cultures and genders during in-between times of shifting empire and capital. In so doing, they offer an important discussion of race, class, nation, and citizenship centered on transgender bodies of color that challenges readers to rethink the way they understand the gendered social and economic challenges of today.

Linda Heidenreich is an associate professor of history and of women's, gender, and sexuality studies at Washington State University. They are the author of "This Land Was Mexican Once": Histories of Resistance from Northern California and coeditor of Three Decades of Engendering History: Selected Works of Antonia I. Castañeda.

"This queer Chicanx history project is everything such a project should be: a brilliant analysis with fresh and illuminating ideas and approaches, an unearthing of hidden trans stories, and an intellectual exploration of trans mestiz@ identity."—Norma E. Cantú, Norine R. and T. Frank Murchison Professor of the Humanities at Trinity University

"Nepantla Squared is a welcome and refreshing contribution to intersectional trans, queer, and feminist histories of resistant gender. Linda Heidenreich provides a new depth of context to famous stories of anti-trans violence and resistance, like those of Jack Garland and Gwen Araujo, showing how these are stories about colonialism, capitalism, and neoliberal economic policy. Heidenreich's writing is pleasurably readable and the book is insightful and original."—Dean Spade, author of Normal Life: Administrative Violence, Critical Trans Politics, and the Limits of Law

"Historical, materialist, and timely, this book adds new important ways of understanding trans in different historical moments and through nonbinary mestiz@ indigenous roots and routes in the Americas."—Kale Bantigue Fajardo, author of Filipino Crosscurrents: Oceanographies of Seafaring, Masculinities, and Globalization