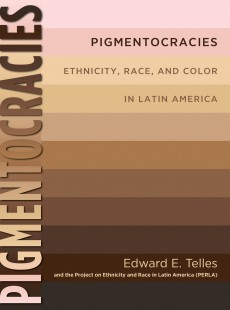 Pigmentocracies--the fruit of the multiyear Project on Ethnicity and Race in Latin America (PERLA)--is a richly revealing analysis of contemporary attitudes toward ethnicity and race in Brazil, Colombia, Mexico, and Peru, four of Latin America's most populous nations. Based on extensive, original sociological and anthropological data generated by PERLA, this landmark study analyzes ethnoracial classification, inequality, and discrimination, as well as public opinion about Afro-descended and indigenous social movements and policies that foster greater social inclusiveness, all set within an ethnoracial history of each country. A once-in-a-generation examination of contemporary ethnicity, this book promises to contribute in significant ways to policymaking and public opinion in Latin America.

Edward Telles, PERLA's principal investigator, explains that profound historical and political forces, including multiculturalism, have helped to shape the formation of ethnic identities and the nature of social relations within and across nations. One of Pigmentocracies's many important conclusions is that unequal social and economic status is at least as much a function of skin color as of ethnoracial identification. Investigators also found high rates of discrimination by color and ethnicity widely reported by both targets and witnesses. Still, substantial support across countries was found for multicultural-affirmative policies--a notable result given that in much of modern Latin America race and ethnicity have been downplayed or ignored as key factors despite their importance for earlier nation-building.