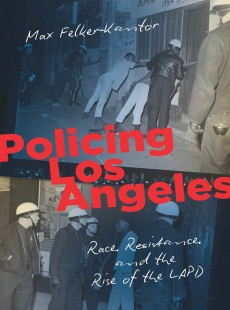 Race, Resistance, and the Rise of the LAPD

When the Los Angeles neighborhood of Watts erupted in violent protest in August 1965, the uprising drew strength from decades of pent-up frustration with employment discrimination, residential segregation, and poverty. But the more immediate grievance was anger at the racist and abusive practices of the Los Angeles Police Department. Yet in the decades after Watts, the LAPD resisted all but the most limited demands for reform made by activists and residents of color, instead intensifying its power.

In Policing Los Angeles, Max Felker-Kantor narrates the dynamic history of policing, anti-police abuse movements, race, and politics in Los Angeles from the 1965 Watts uprising to the 1992 Los Angeles rebellion. Using the explosions of two large-scale uprisings in Los Angeles as bookends, Felker-Kantor highlights the racism at the heart of the city's expansive police power through a range of previously unused and rare archival sources. His book is a gripping and timely account of the transformation in police power, the convergence of interests in support of law and order policies, and African American and Mexican American resistance to police violence after the Watts uprising.