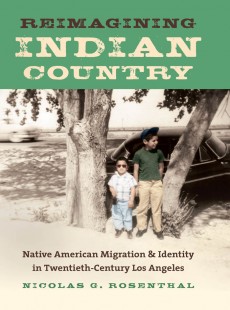 For decades, most American Indians have lived in cities, not on reservations or in rural areas. Still, scholars, policymakers, and popular culture often regard Indians first as reservation peoples, living apart from non-Native Americans. In this book, Nicolas Rosenthal reorients our understanding of the experience of American Indians by tracing their migration to cities, exploring the formation of urban Indian communities, and delving into the shifting relationships between reservations and urban areas from the early twentieth century to the present. With a focus on Los Angeles, which by 1970 had more Native American inhabitants than any place outside the Navajo reservation, Reimagining Indian Country shows how cities have played a defining role in modern American Indian life and examines the evolution of Native American identity in recent decades. Rosenthal emphasizes the lived experiences of Native migrants in realms including education, labor, health, housing, and social and political activism to understand how they adapted to an urban environment, and to consider how they formed--and continue to form--new identities. Though still connected to the places where indigenous peoples have preserved their culture, Rosenthal argues that Indian identity must be understood as dynamic and fully enmeshed in modern global networks.