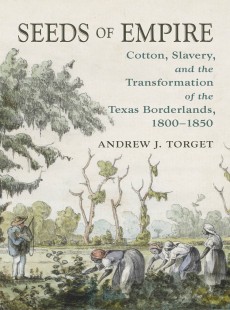 Cotton, Slavery, and the Transformation of the Texas Borderlands, 1800-1850

By the late 1810s, a global revolution in cotton had remade the U.S.-Mexico border, bringing wealth and waves of Americans to the Gulf Coast while also devastating the lives and villages of Mexicans in Texas. In response, Mexico threw open its northern territories to American farmers in hopes that cotton could bring prosperity to the region. Thousands of Anglo-Americans poured into Texas, but their insistence that slavery accompany them sparked pitched battles across Mexico. An extraordinary alliance of Anglos and Mexicans in Texas came together to defend slavery against abolitionists in the Mexican government, beginning a series of fights that culminated in the Texas Revolution. In the aftermath, Anglo-Americans rebuilt the Texas borderlands into the most unlikely creation: the first fully committed slaveholders' republic in North America.

Seeds of Empire tells the remarkable story of how the cotton revolution of the early nineteenth century transformed northeastern Mexico into the western edge of the United States, and how the rise and spectacular collapse of the Republic of Texas as a nation built on cotton and slavery proved to be a blueprint for the Confederacy of the 1860s.