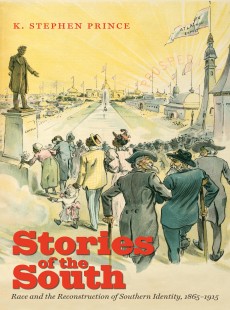 Stories of the South

Race and the Reconstruction of Southern Identity, 1865-1915

In the immediate aftermath of the Civil War, the character of the South, and even its persistence as a distinct region, was an open question. During Reconstruction, the North assumed significant power to redefine the South, imagining a region rebuilt and modeled on northern society. The white South actively resisted these efforts, battling the legal strictures of Reconstruction on the ground. Meanwhile, white southern storytellers worked to recast the South's image, romanticizing the Lost Cause and heralding the birth of a New South. In Stories of the South, K. Stephen Prince argues that this cultural production was as important as political competition and economic striving in turning the South and the nation away from the egalitarian promises of Reconstruction and toward Jim Crow.

Examining novels, minstrel songs, travel brochures, illustrations, oratory, and other cultural artifacts produced in the half century following the Civil War, Prince demonstrates the centrality of popular culture to the reconstruction of southern identity, shedding new light on the complicity of the North in the retreat from the possibility of racial democracy.