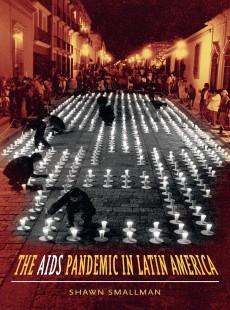 The AIDS Pandemic in Latin America

Of the more than 40 million people around the world currently living with HIV/AIDS, two million live in Latin America and the Caribbean. In an engaging chronicle illuminated by his travels in the region, Shawn Smallman shows how the varying histories and cultures of the nations of Latin America have influenced the course of the pandemic. He demonstrates that a disease spread in an intimate manner is profoundly shaped by impersonal forces.

In Latin America, Smallman explains, the AIDS pandemic has fractured into a series of subepidemics, driven by different factors in each country. Examining cultural issues and public policies at the country, regional, and global levels, he discusses why HIV has had such a heavy impact on Honduras, for instance, while leaving the neighboring state of Nicaragua relatively untouched, and why Latin America as a whole has kept infection rates lower than other global regions, such as Africa and Asia.
Smallman draws on the most recent scientific research as well as his own interviews with AIDS educators, gay leaders, drug traffickers, crack addicts, transvestites, and doctors in Cuba, Brazil, and Mexico. Highlighting the realities of gender, race, sexuality, poverty, politics, and international relations throughout Latin America and the Caribbean, Smallman brings a fresh perspective to understanding the cultures of the region as well as the global AIDS crisis.