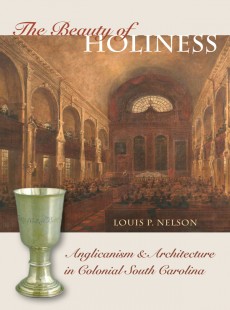 The Beauty of Holiness

Intermingling architectural, cultural, and religious history, Louis Nelson reads Anglican architecture and decorative arts as documents of eighteenth-century religious practice and belief. In The Beauty of Holiness, he tells the story of the Church of England in colonial South Carolina, revealing how the colony's Anglicans negotiated the tensions between the persistence of seventeenth-century religious practice and the rising tide of Enlightenment thought and sentimentality.

Nelson begins with a careful examination of the buildings, grave markers, and communion silver fashioned and used by early Anglicans. Turning to the religious functions of local churches, he uses these objects and artifacts to explore Anglican belief and practice in South Carolina. Chapters focus on the role of the senses in religious understanding, the practice of the sacraments, and the place of beauty, regularity, and order in eighteenth-century Anglicanism. The final section of the book considers the ways church architecture and material culture reinforced social and political hierarchies.

Richly illustrated with more than 250 architectural images and photographs of religious objects, The Beauty of Holiness depends on exhaustive fieldwork to track changes in historical architecture. Nelson imaginatively reconstructs the history of the Church of England in colonial South Carolina and its role in public life, from its early years of ambivalent standing within the colony through the second wave of Anglicanism beginning in the early 1750s.