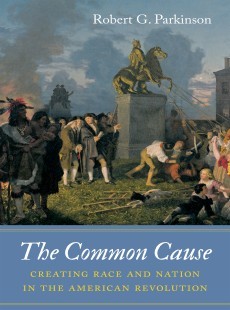 Creating Race and Nation in the American Revolution

When the Revolutionary War began, the odds of a united, continental effort to resist the British seemed nearly impossible. Few on either side of the Atlantic expected thirteen colonies to stick together in a war against their cultural cousins. In this pathbreaking book, Robert Parkinson argues that to unify the patriot side, political and communications leaders linked British tyranny to colonial prejudices, stereotypes, and fears about insurrectionary slaves and violent Indians. Manipulating newspaper networks, Washington, Jefferson, Adams, Franklin, and their fellow agitators broadcast stories of British agents inciting African Americans and Indians to take up arms against the American rebellion. Using rhetoric like "domestic insurrectionists" and "merciless savages," the founding fathers rallied the people around a common enemy and made racial prejudice a cornerstone of the new Republic.

In a fresh reading of the founding moment, Parkinson demonstrates the dual projection of the "common cause." Patriots through both an ideological appeal to popular rights and a wartime movement against a host of British-recruited slaves and Indians forged a racialized, exclusionary model of American citizenship.

"The field of the American Revolution has not seen many game-changing books in the twenty-first century, but this is one. Political history meets military history meets cultural history here in an argument about both the nature of the Revolutionary War and the emerging U.S. political culture. The narrative integrates white fears of native Americans and African Americans into the story, explaining what happened between 1775 and 1783 with tremendous implications for the future of the nation."
--David Waldstreicher, The Graduate Center, City University of New York

"What did it mean to belong to the American People in the Revolutionary era? Robert Parkinson presents a new origin story based on the centrality of matters of exclusion, especially race, to the Revolution. Bringing colonists into ‘the common cause’ meant excluding native and black people, whether they supported it or not. They would have no place among ‘the People of the United States’ as that People gave itself identity and form. "
--Edward Countryman, Southern Methodist University

"Engrossing. . . . A must-read for anyone interested in the American Revolution and issues of race."
--Library Journal, starred review

“Brilliant, timely, and indispensable. . . . Parkinson writes with authority on military, political, social, and cultural history, reconstructing the story of this critical period as it actually unfolded, with everything happening at once.”
--Annette Gordon-Reed, New York Review of Books

"Persuasively explains the intensely racialized nature of citizenship in the newly independent U.S. and the long-standing problems posed by the exclusion of Americans of indigenous or African heritage from the 'common cause" of the Revolution."
--Publishers Weekly

“One of the most significant studies in of the Revolution in years. It sweeps the entire war; connects cultural, military, and political concerns; contains the best survey of American newspapers during this period; and argues persuasively that fear of blacks and Indians formed the psychic center of the new nation. Highly recommended.”
--CHOICE

“Wonderfully written and deeply researched. . . . Reveals a very different and much darker picture of the revolution. . . . Full of illuminating insights about familiar events.”
--William and Mary Quarterly

"Even as he builds on the existing scholarship about the Revolution, Parkinson recasts our understanding of the Revolutionary War and its lasting impact."
--Virginia Magazine of History and Biography 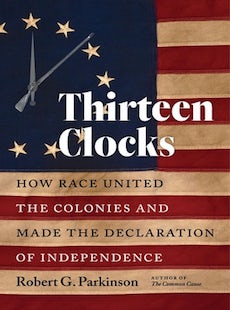