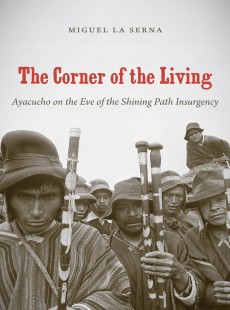 The Corner of the Living

Ayacucho on the Eve of the Shining Path Insurgency

Peru's indigenous peoples played a key role in the tortured tale of Shining Path guerrillas from the 1960s through the first decade of the twenty-first century. The villagers of Chuschi and Huaychao, high in the mountains of the department of Ayacucho, have an iconic place in this violent history. Emphasizing the years leading up to the peak period of violence from 1980 to 2000, when 69,000 people lost their lives, Miguel La Serna asks why some Andean peasants chose to embrace Shining Path ideology and others did not.
Drawing on archival materials and ethnographic field work, La Serna argues that historically rooted and locally specific power relations, social conflicts, and cultural understandings shaped the responses of indigenous peasants to the insurgency. In Chuschi, the guerrillas found indigenous support for the movement and dreamed of sparking a worldwide Maoist revolution. In Huaychao, by contrast, villagers rose up against Shining Path forces, precipitating more violence and feeding an international uproar that took on political significance for Peru during the Cold War. The Corner of the Living illuminates both the stark realities of life for the rural poor everywhere and why they may or may not choose to mobilize around a revolutionary cause.