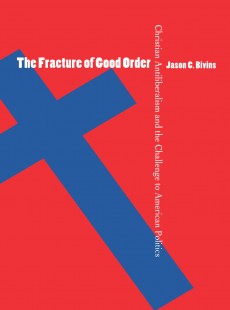 The Fracture of Good Order

Christian Antiliberalism and the Challenge to American Politics

Whether picketing outside abortion clinics, speaking out at school board meetings, or attending anti-death penalty vigils, many Americans have publicly opposed local, state, or federal government policies on the basis of their religious convictions. In The Fracture of Good Order, Jason Bivins examines the growing phenomenon of Christian protest against civil authority and political order in the United States. He argues that since the 1960s, there has been a proliferation of religious activism against what protesters perceive as government's excessive power and lack of moral principle. Calling this phenomenon "Christian antiliberalism," Bivins finds at its center a belief that American politics is based on a liberal tradition that gives government too much social and economic influence and threatens the practice of a religious life.

Focusing on the Catholic pacifism of Daniel and Philip Berrigan and the Jonah House resistance community, the Christian Right's homeschooling movement, and the evangelical Sojourners community, Bivins combines religious studies with political theory to explore the common ground shared by these disparate groups. Despite their vast ideological and institutional differences, Bivins argues, these activists justify their actions in overtly religious terms based on a rejection of basic tenets of the American political system. Analyzing the widespread dissatisfaction with the conventional forms of political identity and affiliation that characterize American civic life today, Bivins sheds light on the complex relations between religion and democratic society.