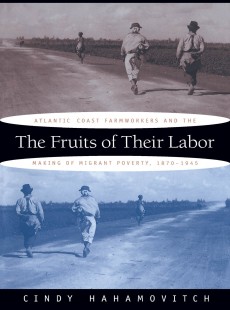 The Fruits of Their Labor

Atlantic Coast Farmworkers and the Making of Migrant Poverty, 1870-1945

In 1933 Congress granted American laborers the right of collective bargaining, but farmworkers got no New Deal. Cindy Hahamovitch's pathbreaking account of migrant farmworkers along the Atlantic Coast shows how growers enlisted the aid of the state in an unprecedented effort to keep their fields well stocked with labor.

This is the story of the farmworkers--Italian immigrants from northeastern tenements, African American laborers from the South, and imported workers from the Caribbean--who came to work in the fields of New Jersey, Georgia, and Florida in the decades after 1870. These farmworkers were not powerless, the author argues, for growers became increasingly open to negotiation as their crops ripened in the fields. But farmers fought back with padrone or labor contracting schemes and 'work-or-fight' forced-labor campaigns. Hahamovitch describes how growers' efforts became more effective as federal officials assumed the role of padroni, supplying farmers with foreign workers on demand.

Today's migrants are as desperate as ever, the author concludes, not because poverty is an inevitable feature of modern agricultural work, but because the federal government has intervened on behalf of growers, preventing farmworkers from enjoying the fruits of their labor.