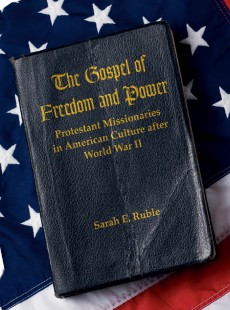 The Gospel of Freedom and Power

In the decades after World War II, Protestant missionaries abroad were a topic of vigorous public debate. From religious periodicals and Sunday sermons to novels and anthropological monographs, public conversations about missionaries followed a powerful yet paradoxical line of reasoning, namely that people abroad needed greater autonomy from U.S. power and that Americans could best tell others how to use their freedom. In The Gospel of Freedom and Power, Sarah E. Ruble traces and analyzes these public discussions about what it meant for Americans abroad to be good world citizens, placing them firmly in the context of the United States' postwar global dominance.
Bringing together a wide range of sources, Ruble seeks to understand how discussions about a relatively small group of Americans working abroad became part of a much larger cultural conversation. She concludes that whether viewed as champions of nationalist revolutions or propagators of the gospel of capitalism, missionaries--along with their supporters, interpreters, and critics--ultimately both challenged and reinforced a rhetoric of exceptionalism that made Americans the judges of what was good for the rest of the world.