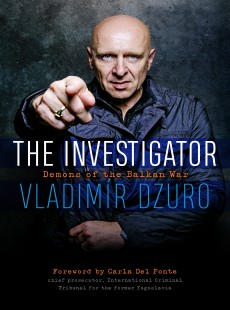 Demons of the Balkan War

The war that broke out in the former Yugoslavia at the end of the twentieth century unleashed unspeakable acts of violence committed against defenseless civilians, including a grizzly mass murder at an Ovčara pig farm in 1991. An international tribunal was set up to try the perpetrators of crimes such as this, and one of the accused was Slavko Dokmanović, who at the time was the mayor of a local town. Vladimír Dzuro, a criminal detective from Prague, was one of the investigators charged with discovering what happened on that horrific night at Ovčara. The story Dzuro presents here, drawn from his daily notes, is devastating. It was a time of brutal torture, random killings, and the disappearance of innocent people. Dzuro provides a gripping account of how he and a handful of other investigators picked up the barest of leads that eventually led them to the gravesite where they exhumed the bodies. They were able to track down Dokmanović, only to find that taking him into custody was a different story altogether. The politics that led to the war hindered justice once it ended. Without any thoughts of risk to their own personal safety, Dzuro and his colleagues were determined to bring Dokmanović to justice. In addition to the story of the pursuit and arrest of Dokmanović, The Investigator provides a realistic picture of the war crime investigations that led to the successful prosecution of a number of war criminals. Visit warcrimeinvestigator.com for more information or watch a book trailer.

Vladimír Dzuro worked as a criminal detective between 1983 and 1995, initially investigating violent crime with the Criminal Investigation Department in Prague and later at the National Central Bureau of Interpol in Prague. He currently works at the United Nations Office of Internal Oversight Services as chief of the New York Headquarters Office. Visit Dzuro's website at warcrimeinvestigator.com.

"This is a detective story with a difference. . . . The Investigator is a raw and unique firsthand account of an extraordinary pursuit of justice in the face of absolute horror."—Julian Borger, Pulitzer Prize–winning journalist and world affairs editor for the Guardian

"Personal accounts of investigations of war crimes, such as this one by Vladimír Dzuro, breathe life into the abstract project of accountability and show the challenges of operating a criminal justice system in an international environment."—Louise Arbour, United Nations special representative for international migration (2017–present) and chief prosecutor for the International Criminal Tribunal for the former Yugoslavia (1996–99)

"In a captivating personal account, Vladimír Dzuro brings to life the early days of the International Criminal Tribunal for the former Yugoslavia and describes in detail how its investigators and prosecutors worked against incredible odds to bring to justice some of the worst war criminals of the twentieth century. It is the story of the birth of the modern era of international justice and of how, despite expectations to the contrary, this undertaking became a success."—Clint Williamson, U.S. ambassador at large for war crimes issues (2006–9)