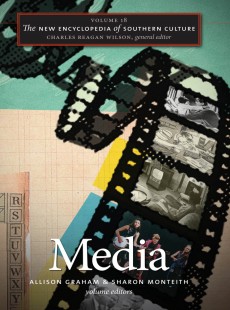 This volume of The New Encyclopedia of Southern Culture examines how mass media have shaped popular perceptions of the South--and how the South has shaped the history of mass media. An introductory overview by Allison Graham and Sharon Monteith is followed by 40 thematic essays and 132 topical articles that examine major trends and seminal moments in film, television, radio, press, and Internet history. Among topics explored are the southern media boom, beginning with the Christian Broadcast Network and CNN; popular movies, television shows, and periodicals that have shaped ideas about the region, including Gone with the Wind, The Beverly Hillbillies, Roots, and Southern Living; and southern media celebrities such as Oprah Winfrey, Truman Capote, and Stephen Colbert. The volume details the media's involvement in southern history, from depictions of race in the movies to news coverage of the civil rights movement and Hurricane Katrina. Taken together, these entries reveal and comment on the ways in which mass media have influenced, maintained, and changed the idea of a culturally unique South.