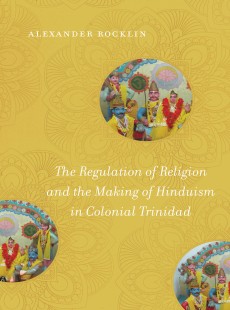 How can religious freedom be granted to people who do not have a religion? While Indian indentured workers in colonial Trinidad practiced cherished rituals, "Hinduism" was not a widespread category in India at the time. On this Caribbean island, people of South Asian descent and African descent came together—under the watchful eyes of the British rulers—to walk on hot coals for fierce goddesses, summon spirits of the dead, or honor Muslim martyrs, practices that challenged colonial norms for religion and race. Drawing deeply on colonial archives, Alexander Rocklin examines the role of the category of religion in the regulation of the lives of Indian laborers struggling for autonomy.

Gradually, Indians learned to narrate the origins, similarities, and differences among their fellows' cosmological views, and to define Hindus, Muslims, and Christians as distinct groups. Their goal in doing this work of subaltern comparative religion, as Rocklin puts it, was to avoid criminalization and to have their rituals authorized as legitimate religion—they wanted nothing less than to gain access to the British promise of religious freedom. With the indenture system's end, the culmination of this politics of recognition was the gradual transformation of Hindus' rituals and the reorganization of their lives—they fabricated a "world religion" called Hinduism.