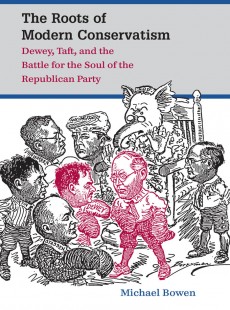 The Roots of Modern Conservatism

Dewey, Taft, and the Battle for the Soul of the Republican Party

Between 1944 and 1953, a power struggle emerged between New York governor Thomas Dewey and U.S. senator Robert Taft of Ohio that threatened to split the Republican Party. In The Roots of Modern Conservatism, Michael Bowen reveals how this two-man battle for control of the GOP--and the Republican presidential nomination--escalated into a divide of ideology that ultimately determined the party's political identity.

Initially, Bowen argues, the separate Dewey and Taft factions endorsed fairly traditional Republican policies. However, as their conflict deepened, the normally mundane issues of political factions, such as patronage and fund-raising, were overshadowed by the question of what "true" Republicanism meant. Taft emerged as the more conservative of the two leaders, while Dewey viewed Taft's policies as outdated. Eventually, conservatives within the GOP organized against Dewey's leadership and, emboldened by the election of Dwight Eisenhower, transformed the party into a vehicle for the Right. Bowen reveals how this decade-long battle led to an outpouring of conservative sentiment that had been building since World War II, setting the stage for the ascendancy of Barry Goldwater and the modern conservative movement in the 1960s.