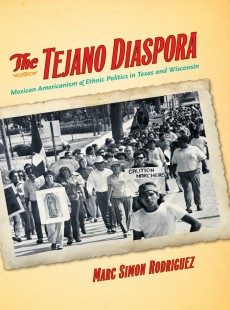 Mexican Americanism and Ethnic Politics in Texas and Wisconsin

Each spring during the 1960s and 1970s, a quarter million farm workers left Texas to travel across the nation, from the Midwest to California, to harvest America's agricultural products. During this migration of people, labor, and ideas, Tejanos established settlements in nearly all the places they traveled to for work, influencing concepts of Mexican Americanism in Texas, California, Wisconsin, Michigan, and elsewhere. In The Tejano Diaspora, Marc Simon Rodriguez examines how Chicano political and social movements developed at both ends of the migratory labor network that flowed between Crystal City, Texas, and Wisconsin during this period.

Rodriguez argues that translocal Mexican American activism gained ground as young people, activists, and politicians united across the migrant stream. Crystal City, well known as a flash point of 1960s-era Mexican Americanism, was a classic migrant sending community, with over 80 percent of the population migrating each year in pursuit of farm work. Wisconsin, which had a long tradition of progressive labor politics, provided a testing ground for activism and ideas for young movement leaders. By providing a view of the Chicano movement beyond the Southwest, Rodriguez reveals an emergent ethnic identity, discovers an overlooked youth movement, and interrogates the meanings of American citizenship.