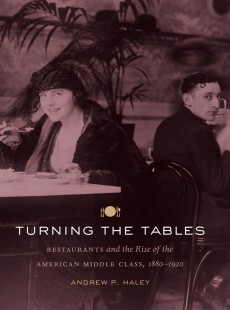 Restaurants and the Rise of the American Middle Class, 1880-1920

In the nineteenth century, restaurants served French food to upper-class Americans with aristocratic pretensions, but by the twentieth century, even the best restaurants dished up ethnic and American foods to middle-class urbanites spending a night on the town. In Turning the Tables, Andrew Haley examines the transformation of American public dining at the start of the twentieth century and argues that the birth of the modern American restaurant helped establish the middle class as the arbiter of American culture.

Early twentieth-century battles over French-language menus, scientific eating, ethnic restaurants, unescorted women, tipping, and servantless restaurants pitted the middle class against the elite. United by their shared preferences for simpler meals and English-language menus, middle-class diners defied established conventions and successfully pressured restaurateurs to embrace cosmopolitan ideas of dining that reflected the preferences and desires of middle-class patrons.
Drawing on culinary magazines, menus, restaurant journals, and newspaper accounts, including many that have never before been examined by historians, Haley traces material changes to restaurants at the turn of the century that demonstrate that the clash between the upper class and the middle class over American consumer culture shaped the "tang and feel" of life in the twentieth century.