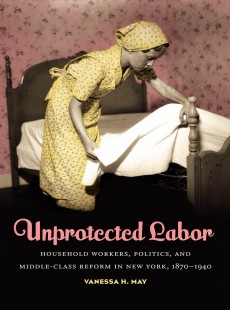 Through an analysis of women's reform, domestic worker activism, and cultural values attached to public and private space, Vanessa May explains how and why domestic workers, the largest category of working women before 1940, were excluded from labor protections that formed the foundation of the welfare state. Looking at the debate over domestic service from both sides of the class divide, Unprotected Labor assesses middle-class women's reform programs as well as household workers' efforts to determine their own working conditions.

May argues that working-class women sought to define the middle-class home as a workplace even as employers and reformers regarded the home as private space. The result was that labor reformers left domestic workers out of labor protections that covered other women workers in New York between the late nineteenth century and the New Deal. By recovering the history of domestic workers as activists in the debate over labor legislation, May challenges depictions of domestics as passive workers and reformers as selfless advocates of working women. Unprotected Labor illuminates how the domestic-service debate turned the middle-class home inside out, making private problems public and bringing concerns like labor conflict and government regulation into the middle-class home.