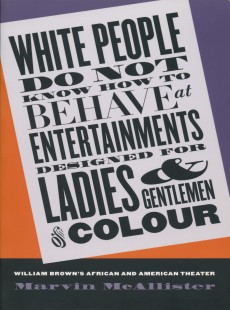 In August 1821, William Brown, a free man of color and a retired ship's steward, opened a pleasure garden on Manhattan's West Side. It catered to black New Yorkers, who were barred admittance to whites-only venues offering drama, music, and refreshment. Over the following two years, Brown expanded his enterprises, founding a series of theaters that featured African Americans playing a range of roles unprecedented on the American stage and that drew increasingly integrated audiences.

Marvin McAllister explores Brown's pioneering career and reveals how each of Brown's ventures--the African Grove, the Minor Theatre, the American Theatre, and the African Company--explicitly cultivated an intercultural, multiracial environment. He also investigates the negative white reactions, verbal and physical, that led to Brown's managerial retirement in 1823.

Brown left his mark on American theater by shaping the careers of his performers and creating new genres of performance. Beyond that legacy, says McAllister, this nearly forgotten theatrical innovator offered a blueprint for a truly inclusive national theater.