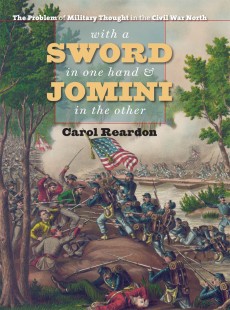 With a Sword in One Hand and Jomini in the Other

The Problem of Military Thought in the Civil War North

When the Civil War began, Northern soldiers and civilians alike sought a framework to help make sense of the chaos that confronted them. Many turned first to the classic European military texts from the Napoleonic era, especially Antoine Henri Jomini's Summary of the Art of War. As Carol Reardon shows, Jomini's work was only one voice in what ultimately became a lively and contentious national discourse about how the North should conduct war at a time when warfare itself was rapidly changing. She argues that the absence of a strong intellectual foundation for the conduct of war at its start--or, indeed, any consensus on the need for such a foundation--ultimately contributed to the length and cost of the conflict.

Reardon examines the great profusion of new or newly translated military texts of the Civil War years intended to fill that intellectual void and draws as well on the views of the soldiers and civilians who turned to them in the search for a winning strategy. In examining how debates over principles of military thought entered into the question of qualifications of officers entrusted to command the armies of Northern citizen soldiers, she explores the limitations of nineteenth-century military thought in dealing with the human elements of combat.