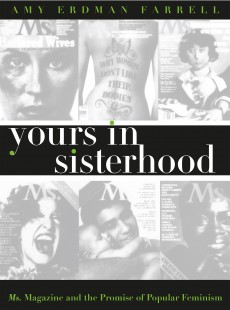 Ms. Magazine and the Promise of Popular Feminism

In the winter of 1972, the first issue of Ms. magazine hit the newsstands. For some activists in the women's movement, the birth of this new publication heralded feminism's coming of age; for others, it signaled the capitulation of the women's movement to crass commercialism. But whatever its critical reception, Ms. quickly gained national success, selling out its first issue in only eight days and becoming a popular icon of the women's movement almost immediately.
Amy Erdman Farrell traces the history of Ms. from its pathbreaking origins in 1972 to its final commercial issue in 1989. Drawing on interviews with former
editors, archival materials, and the text of Ms. itself, she examines the magazine's efforts to forge an oppositional politics within the context of commercial culture.
While its status as a feminist and mass media magazine gave Ms. the power to move in circles unavailable to smaller, more radical feminist periodicals, it also created competing and conflicting pressures, says Farrell. She examines the complicated decisions made by the Ms. staff as they negotiated the multiple--frequently incompatible--demands of advertisers, readers, and the various and changing constituencies of the feminist movement.
An engrossing and objective account, Yours in Sisterhood illuminates the significant yet difficult connections between commercial culture and social movements. It reveals a complex, often contradictory magazine that was a major force in the contemporary feminist movement.