In Defense of Monopoly offers an unconventional but empirically grounded argument in favor of market monopolies. Authors McKenzie and Lee claim that conventional, static models exaggerate the harm done by real-world monopolies, and they show why some degree of monopoly presence is necessary to maximize the improvement of human welfare over time.

Inspired by Joseph Schumpeter's suggestion that market imperfections can drive an economy's long-term progress, In Defense of Monopoly defies conventional assumptions to show readers why an economic system's failure to efficiently allocate its resources is actually a necessary precondition for maximizing the system's long-term performance: the perfectly fluid, competitive economy idealized by most economists is decidedly inferior to one characterized by market entry and exit restrictions or costs.

An economy is not a board game in which players compete for a limited number of properties, nor is it much like the kind of blackboard games that economists use to develop their monopoly models. As McKenzie and Lee demonstrate, the creation of goods and services in the real world requires not only competition but the prospect of gains beyond a normal competitive rate of return. 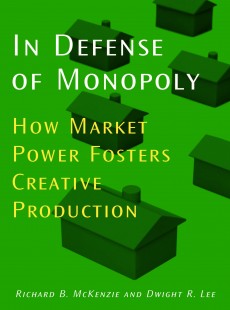 In Defense of Monopoly