In 2013, the government abolished the Canadian International Development Agency (CIDA), which had been Canada’s flagship foreign aid agency for decades, and transferred its functions to the newly renamed Department of Foreign Affairs, Trade and Development (DFATD). As the government is rethinking Canadian aid and its relationship with other foreign policy and commercial objectives, the time is ripe to rethink Canadian aid more broadly.

Edited by Stephen Brown, Molly den Heyer and David R. Black, this revised edition not only analyzes Canada’s past development assistance, it also highlights important new opportunities in the context of the recent change in government. Designed to reach a variety of audiences, contributions by twenty scholars and experts in the field offer an incisive examination of Canada’s record and initiatives in Canadian foreign aid, including its relatively recent emphasis on maternal and child health and on the extractive sector, as well as the longer-term engagement with state fragility.

The portrait that emerges is a sobering one. This book is essential reading for anyone interested in Canada’s changing role in the world. 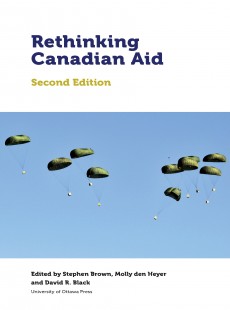