Now in English for the first time, Keila Grinberg's compelling study of the nineteenth-century jurist Antonio Pereira Reboucas (1798–1880) traces the life of an Afro-Brazilian intellectual who rose from a humble background to play a key--and conflicted--role as Brazilians struggled to define citizenship and understand racial politics. One of the most prominent specialists in civil law of his time, Reboucas explained why blacks fought stridently for their own inclusion in society but also complicitly embraced an ethic of silence on race more broadly. Grinberg argues that while this silence was crucial for defining spaces of social mobility and respectability regardless of race, it was also stifling, and played an important role in quelling political mobilization based on racial identity.

Reboucas's commitment to liberal ideals also exemplifies the contradiction he embodied: though he rejected movements that were grounded in racial political mobilization, he was consistently treated as potentially dangerous for the single fact that he was of African origin. Grinberg demonstrates how Reboucas's life and career—encompassing such themes as racial politics and identities, slavery and racism, and imperfect citizenship—are central for our understanding of Atlantic slave and post-abolition societies. 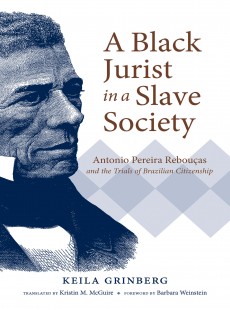 A Black Jurist in a Slave Society

Antonio Pereira Rebouças and the Trials of Brazilian Citizenship