The idea of universal rights is often understood as the product of Europe, but as Laurent Dubois demonstrates, it was profoundly shaped by the struggle over slavery and citizenship in the French Caribbean. Dubois examines this Caribbean revolution by focusing on Guadeloupe, where, in the early 1790s, insurgents on the island fought for equality and freedom and formed alliances with besieged Republicans. In 1794, slavery was abolished throughout the French Empire, ushering in a new colonial order in which all people, regardless of race, were entitled to the same rights.

But French administrators on the island combined emancipation with new forms of coercion and racial exclusion, even as newly freed slaves struggled for a fuller freedom. In 1802, the experiment in emancipation was reversed and slavery was brutally reestablished, though rebels in Saint-Domingue avoided the same fate by defeating the French and creating an independent Haiti.

The political culture of republicanism, Dubois argues, was transformed through this transcultural and transatlantic struggle for liberty and citizenship. The slaves-turned-citizens of the French Caribbean expanded the political possibilities of the Enlightenment by giving new and radical content to the idea of universal rights. 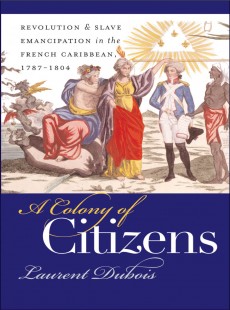 A Colony of Citizens

Revolution and Slave Emancipation in the French Caribbean, 1787-1804