A Cycle of the West rewards its readers with a sweeping saga of the American West and John G. Neihardt's exhilarating vision of frontier history. It is infused with wonder, nostalgia, and a keen appreciation of epic history. Unquestionably the masterpiece of the poet who has been called the "American Homer," A Cycle of the West celebrates the land and legends of the Old West in five narrative poems: The Song of Three Friends (1919), The Song of Hugh Glass (1915), The Song of Jed Smith (1941), The Song of the Indian Wars (1925), and The Song of the Messiah (1935). This unforgettable epic of discovery, conquest, courage, and tragedy speaks movingly and resoundingly of a unique American experience. The new introduction by former Texas poet laureate Alan Birkelbach and annotations by Joe Green present fresh views of Neihardt's iconic work. 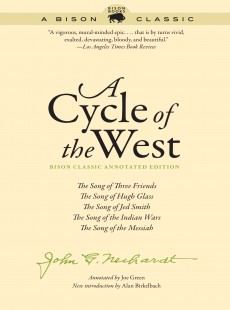 A Cycle of the West