In this book, Bryant Simon brings to life the politics of white South Carolina millhands during the first half of the twentieth century. His revealing and moving account explores how this group of southern laborers thought about and participated in politics and public power.


Taking a broad view of politics, Simon looks at laborers as they engaged in political activity in many venues--at the polling station, on front porches, and on the shop floor--and examines their political involvement at the local, state, and national levels. He describes the campaign styles and rhetoric of such politicians as Coleman Blease and Olin Johnston (himself a former millhand), who eagerly sought the workers' votes. He draws a detailed picture of mill workers casting ballots, carrying placards, marching on the state capital, writing to lawmakers, and picketing factories. These millhands' politics reflected their public and private thoughts about whiteness and blackness,
war and the New Deal, democracy and justice, gender and sexuality, class relations and consumption.

Ultimately, the people depicted here are neither romanticized nor dismissed as the stereotypically racist and uneducated "rednecks" found in many accounts of southern politics. Southern workers understood the political and social forces that shaped their lives, argues Simon, and they developed
complex political strategies to deal with those forces. 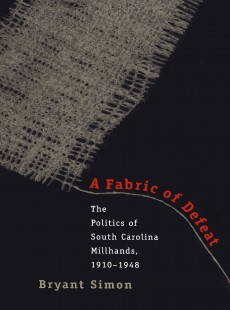 A Fabric of Defeat