In this widely praised book, Vladislav Zubok argues that Western interpretations of the Cold War have erred by exaggerating either the Kremlin's pragmatism or its aggressiveness. Explaining the interests, aspirations, illusions, fears, and misperceptions of the Kremlin leaders and Soviet elites, Zubok offers a Soviet perspective on the greatest standoff of the twentieth century. Using recently declassified Politburo records, ciphered telegrams, diaries, and taped conversations, among other sources, Zubok offers the first work in English to cover the entire Cold War from the Soviet side. A Failed Empire provides a history quite different from those written by the Western victors. In a new preface for this edition, the author adds to our understanding of today's events in Russia, including who the new players are and how their policies will affect the state of the world in the twenty-first century. 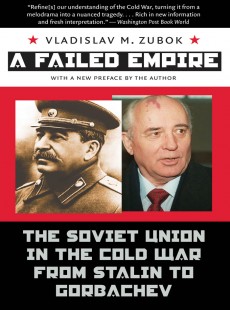 The Soviet Union in the Cold War from Stalin to Gorbachev