Since the early twentieth century, historians have traditionally defined manifest destiny as the belief that the United States was destined to expand from coast to coast. This generation of historians has posed manifest destiny as a unifying ideology of the nineteenth century, one that was popular and pervasive and ultimately fulfilled in the late 1840s when the United States acquired the Pacific Coast. However, the story of manifest destiny was never quite that simple. In A Failed Vision of Empire Daniel J. Burge examines the belief in manifest destiny over the nineteenth century by analyzing contested moments in the continental expansion of the United States, arguing that the ideology was ultimately unsuccessful. By examining speeches, plays, letters, diaries, newspapers, and other sources, Burge reveals how Americans debated the wisdom of expansion, challenged expansionists, and disagreed over what the boundaries of the United States should look like. A Failed Vision of Empire is the first work to capture the messy, complicated, and yet far more compelling story of manifest destiny's failure, debunking in the process one of the most pervasive myths of modern American history. 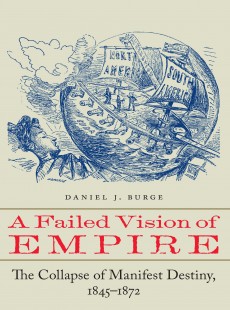 A Failed Vision of Empire