In 2010 twenty American women were selected to represent Team USA in the fourth Women's Baseball World Cup in Caracas, Venezuela; most Americans, however, had no idea such a team even existed.   A Game of Their Own chronicles the largely invisible history of women in baseball and offers an account of the 2010 Women's World Cup tournament. Jennifer Ring includes oral histories of eleven members of the U.S. Women's National Team, from the moment each player picked up a bat and ball as a young girl to her selection for Team USA. Each story is unique, but they share common themes that will resonate with young female players and fans alike: facing skepticism and taunts from players and parents when taking the batter's box or the pitcher's mound, self-doubt, the unceasing pressure to switch to softball, and eventual acceptance by their baseball teammates as they prove themselves as ballplayers. These racially, culturally, and economically diverse players from across the country have ignored the message that their love of the national pastime is "wrong." Their stories come alive as they recount their battles and most memorable moments playing baseball—the joys of exceeding expectations and the pleasure of honing baseball skills and talent despite the lack of support.   With exclusive interviews with players, coaches, and administrators, A Game of Their Own celebrates the U.S. Women's National Team and the excellence of its remarkable players. In response to the jeer "No girls allowed!" these are powerful stories of optimism, feistiness, and staying true to oneself. 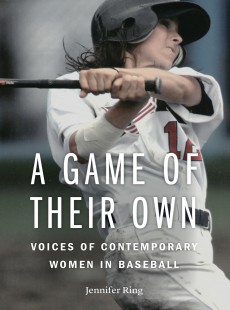 A Game of Their Own

Voices of Contemporary Women in Baseball