Nancy Reagin analyzes the rhetoric, strategies, and programs of more than eighty bourgeois women's associations in Hanover, a large provincial capital, from the Imperial period to the Nazi seizure of power. She examines the social and demographic foundations of the Hanoverian women's movement, interweaving local history with developments on the national level. Using the German experience as a case study, Reagin explores the links between political conservatism and a feminist agenda based on a belief in innate gender differences.

Reagin's analysis encompasses a wide variety of women's organizations--feminist, nationalist, religious, philanthropic, political, and professional. It focuses on the ways in which bourgeois women's class background and political socialization, and their support of the idea of 'spiritual motherhood,' combined within an antidemocratic climate to produce a conservative, maternalist approach to women's issues and other political matters. According to Reagin, the fact that the women's movement evolved in this way helps to explain why so many middle-class women found National Socialism appealing. 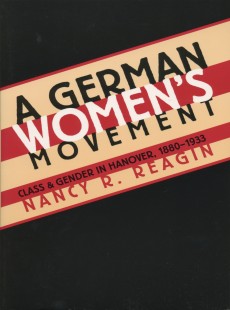