Here is the first fully annotated edition of a landmark in early African American literature--Eliza Potter's 1859 autobiography, A Hairdresser's Experience in High Life. Potter was a freeborn black woman who, as a hairdresser, was in a unique position to hear about, receive confidences from, and observe wealthy white women--and she recorded it all in a revelatory book that delighted Cincinnati's gossip columnists at the time. But more important is Potter's portrait of herself as a wage-earning woman, proud of her work, who earned high pay and accumulated quite a bit of money as one of the nation's earliest "beauticians" at a time when most black women worked at the bottom of the socioeconomic ladder. Because her work offered insights into the private lives of elite white women, Potter carved out a literary space that featured a black working woman at the center, rather than at the margins, of the era's transformations in gender, race, and class structure. Xiomara Santamarina provides an insightful introduction to this edition that includes newly discovered information about Potter, discusses the author's strong satirical voice and proud working-class status, and places the narrative in the context of nineteenth-century literature and history. 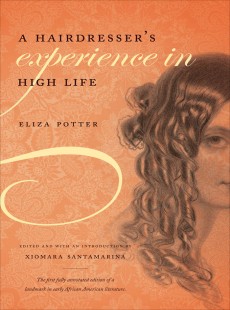 A Hairdresser's Experience in High Life